I’m writing you this letter to tell you that I’m leaving you forever. I’ve been a good man to you for 7 years but I have nothing to show for it. These last 2 weeks have been hell. ... And then your boss called to tell me that you quit your job today...ughhh that was the last straw!

Last week, you came home and didn’t even notice I had a new haircut, I had cooked your favorite meal and even wore a brand new pair of silk boxers. You ate quickly in just 2 minutes and went straight to sleep after watching all of your soaps. You don’t tell me you love me anymore; you don’t want sex or anything that connects us as husband and wife. Either you’re cheating on me or you don’t love me anymore; whatever the case, Later for you....I’m gone!

P.S. don’t try to find me. Your sister and I are moving away to West Virginia together! Have a great life! 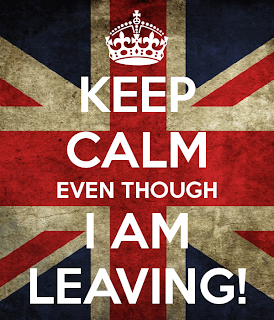 Nothing has made my day more than receiving your letter. In the hellish 7 years that we have been married, a good man is a far cry from what you’ve been. I watch soaps so much because they drown out your constant whining and griping. Too bad that doesn’t work. I DID notice when you got a hair cut last week, but the 1st thing that came to mind was ‘You look just like a girl!’ Since my mother raised me not to say anything if you can’t say something nice, I didn’t comment.

And when you cooked my favorite meal, you must have gotten me confused with MY SISTER, because I stopped eating pork 7 years ago. About those new silk boxers: I turned away from you because the $49.99 price tag was still on them, I prayed it was a coincidence that my sister had just borrowed $50 from me that morning.

After all of this, I still loved you and felt we could work it out. So when I hit the lotto for 10 million dollars, I quit my job and bought us 2 tickets to Jamaica. But when I got home you were gone...and all I found was your lousy letter.

Everything happens for a reason, I guess. I hope you have the fulfilling life you always wanted. By the way, I don’t know if I ever told you this, but my sister Carla was actually born Carl. I hope that’s not a problem. My lawyer said that the letter you wrote ensures you won’t get a dime from me. So take care.

Your Ex-Wife, Rich As Hell and Free!


I don't know who the author of these letters is and I don't know if this is a true story or a mere joke...but it got me thinking... communication is very important in marriage. If this couple had talked about some of the issues that were brewing...could their problem and eventual separation have been avoided? Who knows? If issues continue to simmer in our minds and hearts for very long and are not dealt with...at some point we will snap. Lets deal with things and speak the truth in love... Eph 4:15
Lets remember to keep the communication lines open with our spouses, partners, family, friends, church etc As we do so, I pray and hope that we will have healthier relationships and enjoy the higher life.

Posted by Gospel Girl at 04:30 6 comments: Links to this post

I escaped society's no 1 killer...


Those little metal pieces of equipment that we carry around in order to call and text friends and family are not so cool. Yup, they are certainly a necessary evil...and have turned society into phubbers! You may be wondering what on earth that is...well its the new disease that's running rampage in society leaving many families in disarray, wives are losing husbands to it, parents are watching helplessly as their teens are mercilessly devoured by this alarming disease.

The online Collins dictionary defines phubbing as the act of snubbing some one in a social setting by looking at your phone instead of paying attention. Eish these phones are killing the whole idea of socialising... 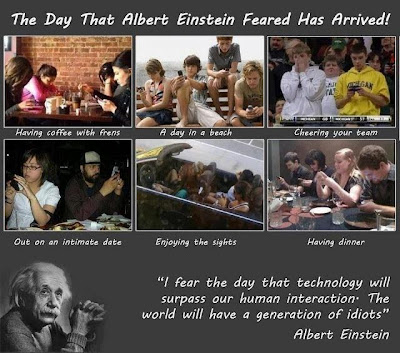 So the jury is still out on whether Albert Einstein actually said the statement in the pic:

“I fear the day technology will surpass our human interaction. The world will have a generation of idiots.”

Regardless of whether he made the statement or not...I still think its atrocious that we have allowed technology to take over our lives in such alarming proportions. Its not just phones but even laptops, computers and tablets which help us to stay connected to our virtual friends in cyberspace.

A few months ago i realised that I was an occasional phubber. I would go to parties, visit relatives and so on and if I got a message on Whatsapp I had to read it immediately and reply. Sometimes this ended up being a 5-10 minute chat session. Oops where did the time go?

Another issue of my phubbing syndrome was the incessant need to stay in touch with my Facebook news feed whilst on the go...much to my family's ever so slight annoyance. I remember some occassions when hubby was driving us somewhere...I would be on my phone and then I would hear hubby say, "are you listening?" and I would embarrassingly say..."err sorry what did you say?" As you can imagine that was defo a conversation killer. I quickly realised that I had to make a few changes.

So the options were
1. Get rid of the smart phone (yikes that's like getting rid of my arm...that's not happening) next...
2. Delete all social media apps from phone (hhmmm fees for rehab are alarming so that was obviously not an option)
3. Exercise self control and respect the people around me enough to actually listen and pay attention to whats going on when I am in a social setting.

I decided to go with Option 3, and I have to say life has truly been more meaningful since then. :)

Some of the Peeps Who Pop In Now and Then

What kind of posts are you looking for?

Ranting On and On

Looking for something on this blog? Enter a Keyword