To The Land of Forever 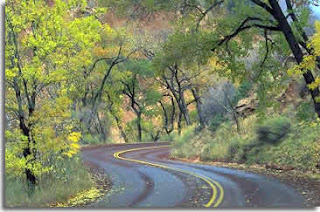 The sun rays seemed to dance as they flickered on the tiny rocks that lined the sides of the road.
A few leaves rustled nearby as they were carried to unknown lands by the cool Easterly breeze.
Ahead of me, I could see many others like me, trudging along on this weary journey.
We had been walking for years towards the better place.
This is what we were born to do,
To walk this journey and make the most of it.

Many had wondered off the path,
Enticed by the beautiful flowers on the wayside, or the smoke coming from within the forest
Of freshly grilled bbq meat,
I often warned them not to lose sight of the mission,
We were not meant to get carried away by fanciful things,
Our mission was to reach our destination,
Taking with us as many as we could for the King.

We met many that had never heard of the King,
I tried to get them to join us,
I told them about Him, how He wanted to give us good things,
And show love and mercy towards all,
who would give up all, to walk this journey for Him.
They laughed and scorned,
"You're talking gibberish," they said.
I shied away, not sure what to say.
"Most absurd," said another.
"It's true," I cried, wanting desperately for them to understand and believe.
They turned away towards the bright lights where people ate and were merry,
I watched them them go, hoping they might change their minds,
But their hearts were rock hard, their eyes heavily veiled.
I only hoped someday, they'd know.


It's not easy though, this journey of ours.
Just last week, we were attacked by bandits from the Smoky Valley,
They came in droves and stole our food, our blankets and even our joy,
I didn't let it affect me much,
But some of the others began to complain and curse the King,
Why did he let that happen?
Some sulked and refused to walk anymore,
Some began to eat the forbidden fruits dangling from branches along the way,
"You know we mustn't do that, it will harm you."
But they laughed and ate some more.
"Nothing happened ...see.... nothing," they said raising their arms in glee,
"It's all a trick to keep us from having fun."

But their laughter was short lived
Their bodies began to degenerate.
Blisters and boils began to appear all over their bodies,
Meanwhile my skin began to glow.

What's happening to us? they asked fear gripping their hearts.
How come you're not affected?
That's because I drink Living Water from the King's well.
You drank and ate from the dark side.
And so from the dark side you will reap.

Is there any hope for us? What can we do to be well? they asked.
Cry out to the King,
He's merciful, He's kind,
He can heal you and He can make you whole,
And give you the strength to complete this journey.
.
Posted by Gospel Girl at 05:16

Some of the Peeps Who Pop In Now and Then

What kind of posts are you looking for?

Ranting On and On

Looking for something on this blog? Enter a Keyword